Glasgow’s premier rugby club, the Warriors, once again asked 2112 Leaflet Distribution to print and distribute their newsletter in the area around their stadium in Scotstoun. 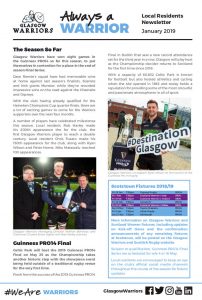 The Glasgow Warriors rugby club continued their long-standing relationship with 2112 Leaflet Distribution by asking us to print and distributed their January 2019 newsletter.  The newsletter was distributed to local residents in the Scotstoun area of Glasgow’s West End.

The purpose of the newsletter was to give local residents an update about The Warriors.  It was also promoting Scotland’s Women rugby who are playing in the Women’s Six Nations at Scotstoun Stadium during the month of February and March. 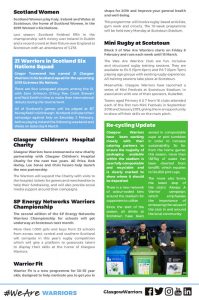 This was one of many jobs that we have done for this client.  We not only distributed the newsletters, we also printed them.  We used 150gsm A4 paper which was folded in half.  While we would not recommend using this quality of paper for leaflets, but it is acceptable for folded leaflets (which this was).

The newsletter gave an update on their season so far, as well as the fixture list for the rest of the season.  It also announced that Glasgow will host the 2019 final of the Guinness Pro 14 Final for the first time since 2016.  It will be held at Celtic Park in Glasgow’s East End.

In addition, it announced a new charity partnership with Glasgow’s Children’s Hospital, as well as a school’s rugby competition where they are expecting 1,000 children from 25 schools to attend.