Mackie Pharmacies recently opened a new pharmacy in Paisley and wanted to promote it to the local and wider community in Paisley. 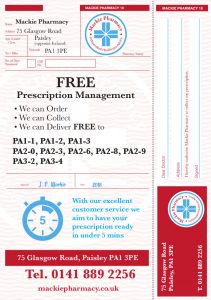 To do this we designed adverts that were to be published in local newspapers. In addition, we also designed, printed and distributed leaflets for them.

As can be seen, the leaflet design was loosely based on an NHS prescription and promoted the services offered by Mackies Pharmacies.

The leaflet also included the postal sectors to which they deliver prescriptions, as well as a list of the doctors surgeries that they pick up from. 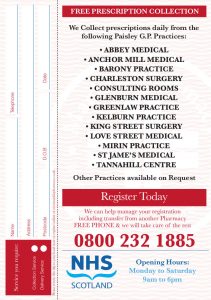 We worked with our client to select the areas that were to be distributed to, which were primarily made up of the postal sectors to which they deliver.  This meant creating  a map of those sectors and using that both to confirm the distribution and to subsequently manage it.

The leaflets were distributed over December and into January as our client wanted to avoid the Christmas and New Year periods.  This, combined with the size of the area being distributed to, meant that we has to manage the distribution carefully to ensure all of the residences in the selected area were completed.

We also used a secure area of our web site to keep an up to date record of the leaflet distribution.  This showed a map of the area that had been completed, along with a list of non-deliveries.  This meant that our client was able to keep track of the progress of the distribution whenever they wanted.