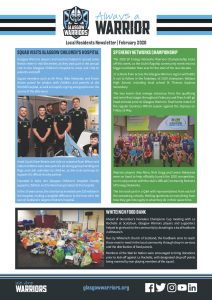 2112 Leaflet Distribution continued our long relationship with Glasgow Warriors Rugby Club by printing distributing their “Always a Warrior” newsletter residents in the area around Scotstoun Stadium, where they play their home games.

The newsletter gave local residents an update about what has been happening with The Warriors, as well as listing their fixtures as they battle for a place in the PRO14 finals.  The newsletter focused on some of the community work that they do.  This includes visits to Glasgow Children’s Hospital, donations to the local foodbank, as well as donations to Whiteinch Community Centre’s Christmas Toy drive in December. 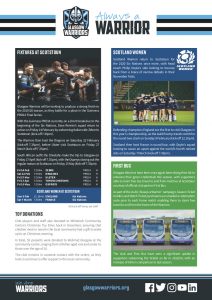 In addition, it was also promoting Scotland’s Women rugby who are playing in the Women’s Six Nations at Scotstoun Stadium.  They play England on 9th February and France of 7th March.

These newsletters were distributed to an area that was specified by our client.  The area covered included the immediate vicinity of the stadium as well as some of the wider surrounding area, effectively making this a boundary distribution.

Our client wanted us to distribute the newsletter before the first game in the Women’s Six Nations tournament, so we had to print and distribute them in a relatively short time frame. The newsletters were A4 sized and were printed on a reasonable quality of paper and were folded in half to ensure that they were a manageable size and would go through letterboxes more easily.

We ensured that the newsletter was printed and distributed on time and we used our GPS tracking System to ensure that they had been distributed to the specified area.